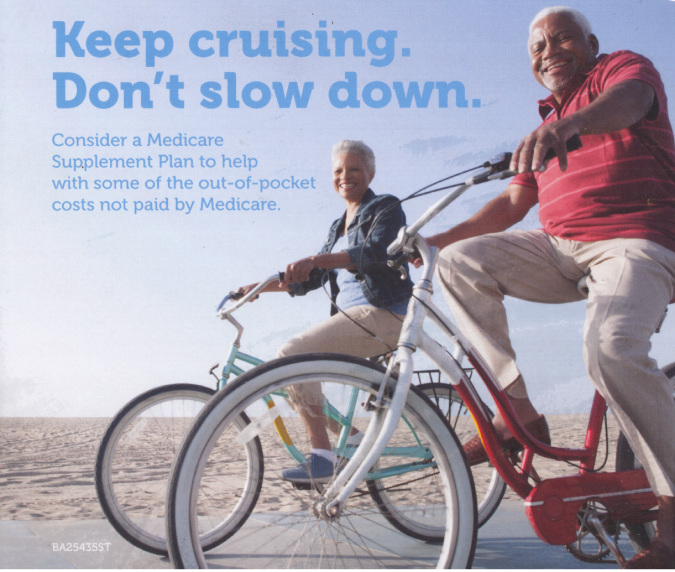 This is not so much an informative post as one of outrage. Quiet, desperate, stomach-churning dissolution and despair, the smoking embers of what I learned 29 hours ago.

My brilliant stroke of outrage came yesterday sitting in the office of my now Medicare broker when I was told how much my insulin is going to cost me after only four months on my Medicare drug plan. I start Medicare in September. By January I’ll be paying outrageous amounts of money for insulin.

My questions during the meeting were about the workings of Medicare, a four-headed beast – Part A (Hospital), B (Doctors & Tests), Supplemental (Who knows but you need it), D (Drugs), but the questions I left with were societal: Where are we headed as a country that’s making medication unaffordable? Is America a society if it only cares about making rich people richer and providing for those in power?

If you want more in-depth Medicare information as someone with diabetes, please go to Laddie Lindahl’s web blog, Test Guess and Go. Laddie did us all a great service taking us through her learning curve as she approached and signed up for Medicare recently.

This post is about outrage and here’s the bottom line: If you have diabetes and you inject insulin you are going to pay just about as much, maybe more, per year for the cost of your Medicare than a commercial health insurance policy. Why? Because of the unregulated inhumane increase in the cost of insulin over the last decades, particularly the last few years.

For this reason you will get caught, a few months into your Medicare drug plan, in the “Donut Hole” also known as the Coverage Gap. You will be required to pay 35% of the actual cost of insulin each month for the rest of the year once you’re in the Hole. For me, and my insulin doses are low, that calculation is $144/month for my insulin. Contrast the $25 I pay currently on my ACA plan for a three month supply. That’s less than $10/month. For type 2s, who use much more insulin than me, the cost will be much, much higher.

What does this mean beside the fact that Canada is looking pretty good as a stop & shop vacation? That this fight to bring down the twenty-fold increased price of insulin since 1970 is essential. I won’t go into the big pharma, lobbying, middlemen bru ha ha but this is a good article if you’re interested. We on insulin also get caught in the donut hole because there are no generics for insulin. Insulin is a Tier 3 brand name drug, the most costly. Basaglar, which is a biosimilar for Lantus, while not a generic may be lower than a Tier 3 drug, I don’t know.

I wrote “injected insulin” earlier. Now get this – If you are on MDI, Multiple Daily Injections, like me you will get your insulin through Medicare’s Drug plan, Part D. If, however, you use an insulin pump, all the insulin you need for your pump is covered under Medicare Part B – durable goods. Part B pays 80% of the cost of your pump, pump supplies and insulin and your supplemental plan covers the remaining 20%. You pay nothing!

I don’t profess to be an expert on this; I told you that up front. I am still reading the plans I selected, and hoarding insulin so I can make it through the first year of Medicare sidestepping the Donut Hole. It’s funny, for years and years people asked me why I don’t use an insulin pump. I always said the truth, I am diligent and disciplined and don’t mind shots, so a pump would offer me more elegant management, but it was not worth the trade off to be tethered to an external device. And now that I use the Dexcom CGM, it would be a second device. Who would have thought Medicare may be the reason I finally go on a pump. It remains to be seen.

While this post has not made you significantly more intelligent about Medicare, maybe you now share a bit of my outrage. Let’s do something. Sign the petition on the American Diabetes Association website to lower the cost of insulin. It takes seconds. Get more informed about what the Diabetes Patient Advocacy Coalition (DPAC) is doing to promote and support public policy initiatives to improve the health of people with diabetes and how you can be part of that.

If you are nowhere near the age of 65 I won’t tell you that by time you get here Medicare will be here to greet you. It may no longer exist. All the more reason for each of us to do something now to make our outrage heard and tell those cyclists up top if they have diabetes and take insulin injections they have little to be smiling about.

Let’s not talk about how ridiculous it was to take this feature away from people over 65, but celebrate that the flood of advocates who pushed up against it made them change their mind.

As of yesterday you can now download the G5 mobile app on your phone and share your numbers with anyone who has an Apple watch, enjoying the full functionality of your CGM as people under 65 do.

Given that I’ll be turning 65 this September, yes I know it’s hard to believe, I’ve been alerted that there is a group relevant to me now on Facebook, Seniors with Sensors. Oh, who would have thought 46 years ago when I was diagnosed at the tender age of 18, a freshman in college, that this would be in my future!

For a fuller explanation, if you know how to read legal documents, apparently this is the one you want to read. If you’re like me, and this makes absolutely no sense to you, here’s an easier read from Dexcom.

Okay, it’s Christmas in June, but completing what I started some weeks ago, here is my last selection from the more than 150 articles I’ve written on the Huffington Post over the past seven years.

All I’d like this Christmas is for you to take this diabetes away. I’m so tired of it already. All the time stabbing my fingers for blood and guessing when my sugar’s too high or too low.

Now that I’m in menopause I can barely tell whether I’m sweating because I’m losing estrogen or because my blood sugar’s crashing at 50!

And, can we talk… I mean the constant figuring out how many carbs are in a ravioli or bread stick or that fried calamari that will be at the company Christmas party. Some days I just want to lie down and shoot myself. Please, please, Santa, would you take this diabetes away?

That is my husband’s job. And he does it brilliantly, or should I say beautifully, as both his head and heart are involved. Actually I could not imagine having a more supportive partner. And while we knew each other a dozen years as friends before we got married, and he “knew” I had type 1 diabetes (knew is in quotes because in-depth knowing is different than superficial knowing), his knowingness, appreciation for what i live with, and admiration, grew with each passing day of our married life.

He wrote a beautiful piece about what it’s been like for him to be the partner of someone with T1D here. Page 8.

I want you also to read the article on page 14 (pictured below) written by the publisher of this magazine, Sana Ajmal, and utterly amazing young woman who lives with type 1 diabetes in Pakistan, with her loving husband and two young boys in a country that DOES NOT encourage men to marry women with diabetes. Beyond wife and mother, she has gotten her PhD in engineering and is working on producing an affordable insulin pump, is a tireless diabetes advocate and inspires those of us fortunate enough to know her. 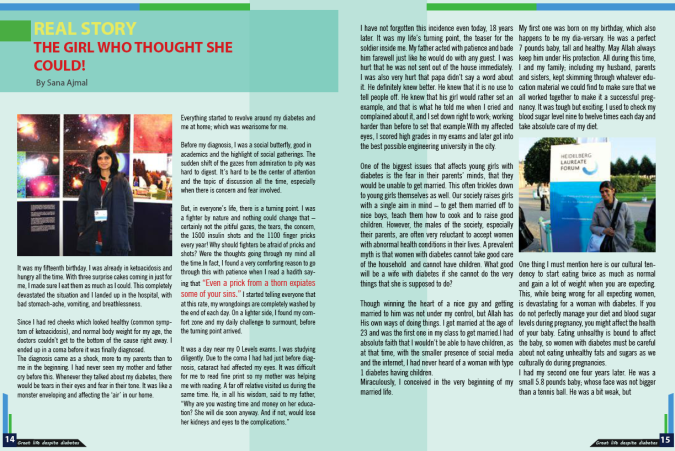