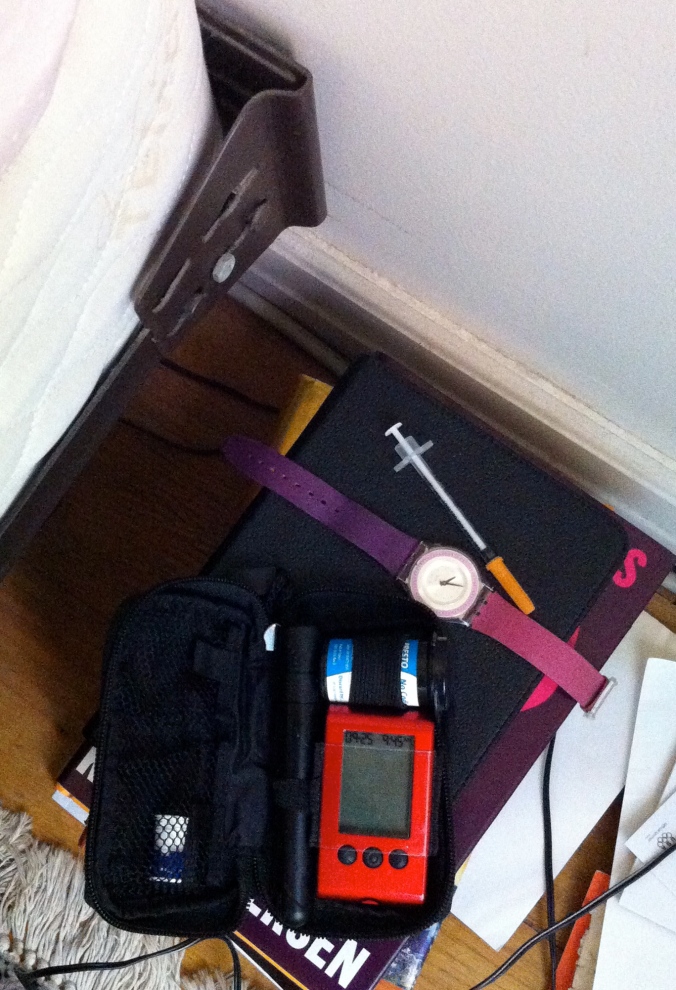 Every night before I go to sleep I check my blood sugar. Every night, without exception for the past few years – until last night.

If you read my last post you know I came back from my vacation to the Netherlands on crutches. I have a sprained ankle that is mending slowly, very slowly, and taking more of my energy – physical and mental – than I realize, and then I would normally allow. Tis true I can hobble around in my soft foam boot cast in the house, but no more than a few blocks outside my apt, and then on crutches along with the cast. Last night I could barely crawl into bed an hour before my usual bedtime and 15 minutes later the magazine I was reading dropped on my chest and woke me up. At which point I realized it was time to turn off my reading light.

Knowing I should check my blood sugar, having moved my meter into the bedroom to keep at the foot of my bed so I can check before I go to sleep and first thing in the morning, I knew I only had to reach down and take a few minutes to prop it on the bed and check. But while my mind said, “Do it!” my spirit wasn’t willing. My spirit in fact said, “F#%K this S&*T! Why do I have to be constantly, rigorously so well behaved?!” This time I’m going to trust I’ll get through the night or wake up if I’m low. And if not, well, I tried. Must have been the exhaustion talking.

Obviously you know I got through the night. I even  awoke to a very satisfying 85 mg/dl. But this excursion in not doing my usual diabetes task made me realize how many tasks I do, and how I do them without question; they have just become part of how I live, quick and perfunctory habits.

This post is not about stopping doing the things we do to keep ourselves safe and well, but rather giving ourselves a pat on the back for all we do. When diabetes tasks become habits, which is great so they take less time and effort, they can also go unseen. In that we don’t see the effort they take anymore, the care we give ourselves. That is good for the doing of our tasks, but it’s also good to step back and congratulate ourselves for all we do.

I’ll also know now and then when the spirit moves me, it’s OK to give myself a break. Hopefully, I won’t always need a bodily break to remind me or wear a physical boot to remind me when it’s time to reboot my energy.

Well it started great, and ended on crutches (notice on the cobblestones), my trip to Holland. I went over two weeks ago to celebrate my sister-in-law’s 50th birthday and see friends and family, my husband being Dutch.

The weather was perfect, the cappuccino perfect, but the cobblestone streets tricky, and without warning I went splat tripping over a slightly raised curb I never saw.

It was one week into our 10-day trip. The husband was spending the morning in the hotel working, while I took a stroll through charming, historic Leiden. A university town with students coming back for the fall semester, it was abuzz with energy, café-sitting and good cheer. The sun was sparkling down.

Approaching a store window to take a closer look, I noticed the bicycles in my way, but not that curb. Plop (that was me), twist (that was my ankle). I righted myself and sat on the curb a few minutes knowing I’d done some bad damage. That ankle has taken similar assaults these past few years, and now I had to find my way back to the hotel. And, I had no idea where I was.

I limped down one street expecting to see something familiar or people at the end, yet it was deserted. Beautiful, but deserted. I followed another street with the same hopes, again deserted. Turning the corner, I found a nice young Dutchman getting ready to take off on his bicycle, and I called out, “Can you tell me where Central Station is?” Everyone in the Netherlands speaks English, thank goodness. Our hotel was across the street.

He pointed to go straight, turn right and I’d be there in 10 minutes. 25 minutes later I was at the hotel. 30 minutes later I was sitting in the ER of Leiden’s University Hospital. It was 12:45 PM and learning I was given the code color blue and would be seen within two hours, even though we were the only ones in the ER, my husband played the diabetes card. Rarely done, but if it wasn’t hurting anyone else, why not?

“My wife has type 1 diabetes and has to eat, we can’t wait two hours.” That got me in to be seen in five minutes – something to remember. After four people looked at me, each shaking my hand and introducing themselves, each starting in Dutch before I told them I don’t speak Dutch, an Xray was taken and we learned I hadn’t broken any bones, but now I know a bad sprain is worse. They put a bandage around my ankle, gave us a handshake and a leaflet that listed crutch stores.

At the crutch store I was given my first lesson and walked out under my own steam. Only minutes later to learn how exhausting these things are. They demand far more upper body strength than I have and by the end of the first day I resolved to keep our evening plans with friends the next three days doing my best to navigate in and out of the train stations because I thought quite consciously I don’t want to die with regrets. But it was no small feat, certainly not for my feet.

I’ve been home a week and I’m still on crutches. I dragged my boot cast from a former injury out of the closet. I’m crutching, hobbling and trying most of all not to move as I didn’t give my ankle the rest it probably craved when I first hurt it.

A dear friend has come to be my legs, to assemble my meals, wash my dishes, drag my meter and insulin from room to room and turn my trail of lights off.

I’ve seen, remarkably, that my blood sugar didn’t rise from this injury while I was still in Holland. Maybe because it took enormous effort to maneuver in and out of train stations and staircases, including the enormous marble staircase in the last bed and breakfast we stayed in. But now, trying to be still and give my ankle the rest it needs, my beautiful blood sugar numbers have gone AWOL. My rapid-acting insulin dose has doubled and I’m still trying to figure out a sufficient amount of Lantus.

All I can say is you really appreciate the mere act of walking across the living room or to the corner store when you can’t. And in the words of my father, “this too shall pass.”

I haven’t posted anything in a while because I’ve been away on vacation, but I did write two articles just before I left that are well worth a look if you haven’t seen them.

Both articles are about our blood glucose meters, why they give us the numbers they do, and why that’s critical to managing your blood sugar. What you should notice in the picture above is almost all the meters show different numbers on them ranging from 99 mg/dl to 118 mg/dl. I took my blood sugar on all of them at the same time and with the same drop of blood.

You’ll find the post about what other things are just as important as our glucose numbers in managing our blood sugar in the article, “Meter Accuracy Counts More — and Less — Than You Think” on the Huffington Post and information about how meters really work in, “Why Meters Can’t Tell Us Our Blood Sugar Levels” on DiabetesMine.com. Be prepared to be surprised.

On the vacation note, sad to say, I returned on crutches. While taking a lovely walk through the charming town of Leiden in the Netherlands, I tripped over a cobblestone curb and ended up with a sprained ankle.

More on that in the next few days.