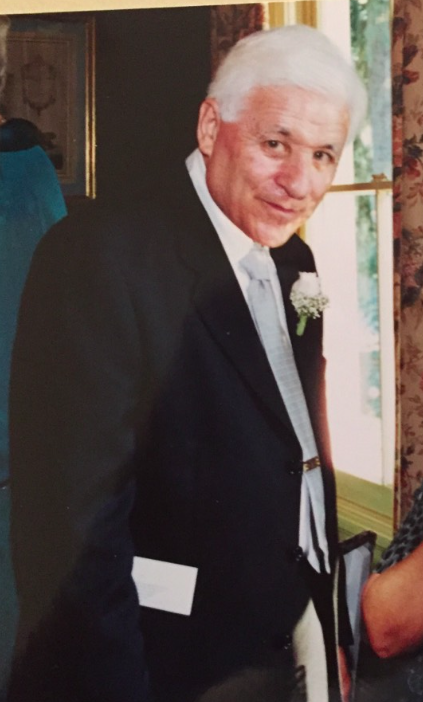 My dad above at my wedding 16 years ago. As you can see, I tend to be a controller. But I think in the end, he controlled when he left us.
He died peacefully early Sunday morning after four years of Lewy’s Body Dementia and two years in a nursing home. He would have been 95 this month. The service was yesterday. It was a lovely day. The husband and I got a ride up to the nursing home from our friend Geri, she also carried in her car two other friends from the city.
It’s funny; at first I hesitated to invite people. I didn’t want anyone to feel obligated, but when friends began saying they wanted to come, I realized how special their gift to us was: their presence, love and kindness, and the history we’ve shared.
The husband and I printed cards Sunday night from my old greeting card designs. We picked two of my inspirational designs that were meaningful to my father. We handed them out at the service as a celebration of a life, and they told the story of a man always looking to get and give love.
My mother read the lovely poem I leave at the end, “Gone from my sight,” which she has always loved, and I do too now.  I spoke about my complex relationship with my father, thanked all the nurses and aides who had taken such good care of him these past two years and told them, “he died at home,” for the nursing home was his home. My brother shared his own remembrances. Then the husband moved everyone with his tearful and heartfelt tribute and gratitude to the people who made me, my parents. Gadget guy has a very tender heart.
About 23 people attended, which amazed us. Some friends of mine and my mother’s, my mother’s mah jong partners, some of the nurses and aids from my father’s unit. It felt rich and full. And, it brought home how moving it is that we rally round each other, gather and give solace when sorrow comes.
There was one surprise when several of us went to my mother’s apartment after the service and lunch. We brought my father’s belongings, which the nursing home had packed for us, into her apartment. Opening the first box we fingered sequin blouses and half used mascara. My mother laughed that maybe my father had a secret life. In fact, half the boxes were the life remnants of a fellow nursing home resident who must have died this same week, named Alice Greenberg. I’m sure it was the first time Alice left the home in years. This morning someone came and took Alice’s belongings back.
Today we donated much of my father’s clothes and the left over lunch from yesterday to the neighborhood homeless shelter. My mother said as we turned the goods over to a lovely young man, “Maybe I could volunteer here when I’m ready.” He welcomed her anytime. She is blessed with a year’s bereavement counseling sessions, which will take her back to the nursing home where she’s spent the last two years and loves the people.
My mother is remarkably strong. At 87 she is still feisty as a friend called her, walking, talking, laughing and exhausted. Since my brother and I have been here for days, reality has not yet set in. She also fell in love with my father these last few years and it was noticeable to all who knew them. It will hit, it will come, and go, and come……
And I am fine. My father had a long life, as I wrote two years ago, I fell in love with him these past few years, and he was so well cared for in the end. With my brother’s quick wit, humor brought us together this week as well as sadness. We’ve laughed a lot as we huddled around my father’s bed this past week. In fact, it often felt like we were in  episodes of Seinfeld or the next hit episode of Norway’s Slow TV.
If there’s any lesson for me it might be the renewed realization that
our shared humanity is paramount
you never know what’s going on for anyone else
be kind
just showing up is a gift you give
and I’ll discover what’s coming as it comes.
If you’ve been following this blog with me, now and then, thank you.

Gone From My Sight

I am standing upon the seashore. A ship, at my side,
spreads her white sails to the moving breeze and starts
for the blue ocean. She is an object of beauty and strength.
I stand and watch her until, at length, she hangs like a speck
of white cloud just where the sea and sky come to mingle with each other.

Then, someone at my side says, “There, she is gone.”

Gone from my sight. That is all. She is just as large in mast,
hull and spar as she was when she left my side.
And, she is just as able to bear her load of living freight to her destined port.

Her diminished size is in me — not in her.
And, just at the moment when someone says, “There, she is gone,”
there are other eyes watching her coming, and other voices
ready to take up the glad shout, “Here she comes!”

And that is dying…

5 thoughts on “My father passed away sunday”