If the husband had been filming me this morning while I was on the phone with Medicare, and we posted it, it would have gone viral. I’m sure. A bit like Norway’s very popular “slow TV.” Throughout I was the picture of calm. Amount of minutes spent on phone: 57,  number of reps talked to: 4, number of departments switched to: 2, number of times I had to call back because they dropped the call: 2.

My call was prompted by this letter I received (black boxes just to cover my personal details) that said I don’t have coverage, and I do. What did I discover on the phone – Medicare will cover Baqsimi – because my endo wrote a request for prior approval – but it will still cost me $442. What?

No rep I spoke to knew if Baqsimi was a “Tier Drug” and if it was, what tier it was. This determines the cost. None of them obviously wrote the letter I received so they sympathized with my confusion.  Frankly I’m sure a lawyer wrote this letter so that most anybody receiving it would read the headlines, assume they were denied coverage, and toss the letter in the bin, and their hope along with it. After all, the letter was six pages long. The other five were about appealing the letter’s decision.

In my online sleuthing, I actually discovered that Baqsimi offers a savings card. Hmm…maybe I buried the lead. If you want to sign up for the card look at the grey bar toward the top where it says, “Sign Up.” It’s easy to miss…I wonder why?

If you’re lucky, you might get your first bottle for free. Of course, I don’t know yet if the card will work for me because after I printed it and brought it to my local pharmacy, along with a script from my endo, the pharmacist went into his computer system and it said I was “denied.” There’s a lot of people in healthcare these days really liking this word “denied.” Then in small print it says somewhere on the one page that accompanies the card you that you have to activate it. 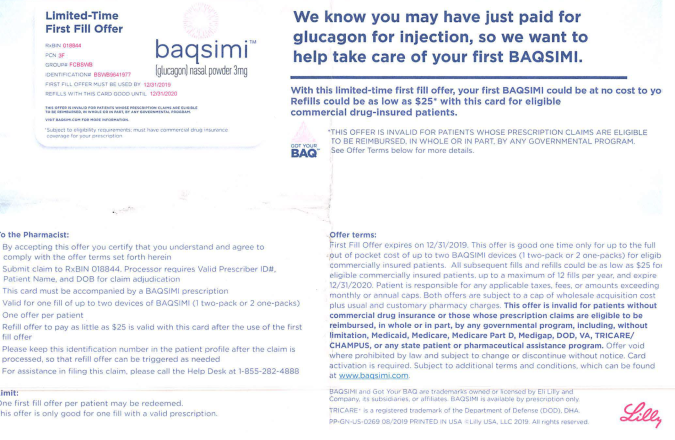 So that’s my next step. Will it work? I don’t know yet. Will keep you posted. Conclusion here.

One thought on “The never-ending, never-knowing state of “denied” drug coverage. Part 1”