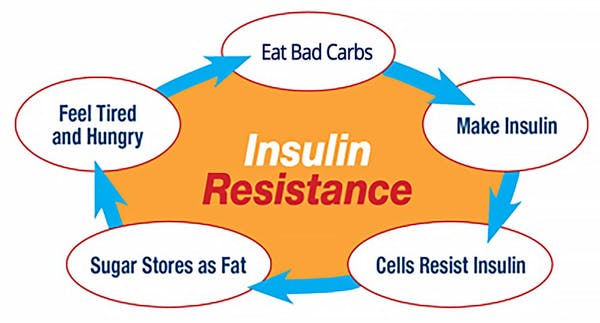 If you doubt this watch a few of Dr. Eric Berg’s videos on YouTube. He’s an expert on the ketogenic diet and intermittent fasting. He explains, simply, why it’s Insulin Resistance that creates diabetes, obesity, fatty liver and heart disease, most degenerative diseases.

Having just stumbled across him, it was a coincidence that a friend this morning sent me an email to say his wife was researching foods low in cholesterol to create a healthier diet for them. I wrote this response immediately and figured this is information I should share:

The great majority of our cholesterol is made by the body, not consumed from food. Dietary cholesterol has little impact on us. And, it is a common myth that cholesterol is the culprit of heart disease. Rather than cause obstructions in our arteries, cholesterol shows up like an ambulance, when irritation occurs, to fix it. It’s been shown through scientific studies over decades that just as many people get heart attacks as have low cholesterol as high.

But cholesterol is only a minor player. The real offender is a diet of too much sugar and starch causing too much insulin in the bloodstream. Every time you eat carbs (and there are carbs in almost everything including vegetables, but not in fat), insulin is released to ferry the breakdown of that food or beverage, which is now glucose, from the bloodstream into the cells. Due to our highly refined carb diet, and frequent snacking, extra insulin is being called forth multiple times a day. We begin to develop a state of insulin resistance (IR): either 1) You can’t produce enough insulin for your constant carb consumption and/ or 2) You’re gaining weight (the two go hand in hand) and belly fat blocks the action of insulin. This inefficient use of insulin is what causes obesity, type 2 diabetes, heart disease and brain diseases like dementia and Alzheimer’s – also known as Type 3 diabetes.

Let’s unpack that a little more. Insulin is a fat storage hormone. When it drives sugar (glucose) into the cells from the blood, the glucose gets stored as fat for future energy use.  With the constant consumption of carbs, our bodies run on these for energy and never get to use our stored fat. Insulin being a fat storage hormone, we start gaining weight. As we gain weight, this fat accumulation around our middle further impedes  insulin’s action. Now the body has to push out more insulin to keep blood sugar levels from rising above normal. This typically goes on for years before the body can no longer push out enough insulin and blood sugars noticeably rise. Wham, type 2 diabetes!

Another way to say this: With our highly processed, carb heavy American diet, our body pushes out greater and greater amounts of insulin to drive the sugar into cells where it gets stored (as fat) for later energy use and keep blood sugar in normal range. As the cells reach capacity to hold the fat, insulin drives the sugar into and around vital organs. This happens for years until the maximum amount of insulin the body can produce no longer is enough. Then, after years of insulin resistance you see on your blood test a higher than normal blood sugar level and you’re told you have type 2 diabetes. Most people will also have signs of a fatty liver and the beginning of heart disease.

Most people with type 2 diabetes are started on pills to lower their blood sugar. But the IR has not been resolved. When the pills no longer work  they are put on insulin to keep their blood sugar down. Now they have extremely excessive amounts of insulin circulating in their bloodstream. This drives their blood sugar down, but makes the IR worse, makes the fat accumulation worse, creates more weight gain and fat in and around the organs until the person dies of a heart attack or gets dementia.

It is important to lower high blood sugar, but what’s needed is to work on reducing insulin resistance: address the cause. This can only be done by eating less carbs so less insulin is needed. When insulin levels fall, weight comes off and the body begins to normalize its blood sugar. Sugar, not fat, insulin, not cholesterol, are responsible for 2 out of 3 people having diseases grouped under diabesity – diabetes, high blood pressure, heart disease, dementia and Alzheimer’s, among others.

This brings us back to the ketogenic diet that is gaining so much popularity. Keto is a very low carb (and so will reduce insulin), moderate protein and high healthy fat diet. People lose weight and  many people are able to reverse their diabetes. I do a modified version of keto.

Intermittent fasting (IF), is often linked with keto as a form of switching the body from burning carbs to burning fat. Like its name, IF means you go longer periods of time without eating. You might fast between finishing dinner around 8 PM and eating lunch the next day. You could not eat for 24 hours or do a fast of several days. IF also significantly drops insulin levels and people lose weight and many reverse their type 2 diabetes. Dr. Jason Fung, is a leading expert in the field.

Just as we’ve heard,  genetics load the gun, but it’s the environment, largely diet, that pulls the trigger. If this speaks to you, do your own research. There’s lots of information online regarding all these topics above.