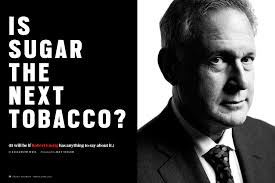 Robert Lustig is a pediatric endocrinologist at the University of California, San Francisco who is carrying the charge that fructose kills. I’ve just spent the afternoon listening to a radio interview he gave recently, watching his lecture,“Sugar: The Bitter Truth,” and watching a series of YouTube mini documentaries he gives about obesity.

In short, Lustig says sugar, specifically fructose, is a toxin given the way our body biochemically metabolizes it. That it actually turns to fat and that obesity is not the cause of metabolic diseases like Type 2 diabetes, hypertension,cardiovascular disease, fatty liver disease, but a marker of these. 20% of obese people will never get one of these diseases.

I agree with Lustig about sugar and refined carbohydrates being our undoing. If you read my new book, Diabetes Do’s & How-To’s, I emphatically say fat is not what makes us fat but sugar, or refined carbohydrate. Carbs cause the body to pump out excess insulin (a fat storage hormone) and carbs we don’t burn get stored as fat. Lustig will tell you the 6.5 ounce Coke that has morphed into the 44 ounce Big Gulp is the devil incarnate.

Twenty five years ago when America went on a low fat diet, people’s diets reduced in fat Lustig says from 40% to 30%. That doesn’t sound like much, but what happened is the carbohydrates we consumed skyrocketed. Take the fat out of food and it tastes like cardboard. Put sugar in and consumers won’t notice. In fact, they’ll like it so much, they’ll eat even more to it! Food manufacturers are not stupid.

In fact, they are ingenious, and spend millions of dollars perfecting recipes that get us hooked on the sublime combination of sugar, salt and fat. But Lustig’s biochemistry lesson will help you understand why fructose is so especially causing our out of control obesity.

Lustig’s proposition is that we could not have, as a nation, and now as a global society – with American fast food now exported everywhere and the rise in obesity paralleling it – gotten obese merely from eating more and moving less.

No, he will tell you it is about what’s in our food and how the body uses it. “A calories is not a calorie,” says Lustig, yet he says they teach dietitians just the opposite the first day of school.

I am consumed (yes, pun) with this debate: what causes obesity, how are our modern day chronic metabolic diseases impacted by what we eat, obesity and how food is being reengineered and what role our environment plays. Where does personal responsibility figure into this and what responsibility does our government and food manufacturers have? A lot in my opinion, yet everyone’s hand is in someone’s pocket.

Personally, I believe if we cut refined carbs out of our diet, including sugared beverages, and ate real food – not processed or packaged – but things that grow on trees and in the ground, relatively untouched by human hands, and animals that are responsibly raised, we would not have an obesity epidemic.