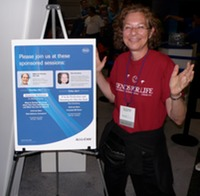 Me and Kerri Sparling 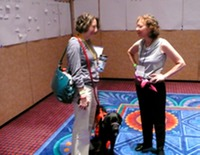 Each year Jeff Hitchcock, CWD’s founder and Laura Billetdeaux, who’s grown this haven for families who have children with type 1 diabetes (from 500 to 3,000 attendees) host a 4-day educational, recreational, Disneyworld-hopping and bonding event. And sure enough, kids go away with new friends for life. For the first time this year adults with type 1 diabetes were also invited and I’d bet they also made some new friends for life.

I was there to inspire parents and fellow patients through three presentations/workshops I gave, including one sponsored by Roche. I also love catching up with the friends and colleagues this unique event brings together every year.

From my two workshops, “Flourishing with Diabetes” and “inspired Diabetes Self-Management” I collected Positive things about living with diabetes and Healthy habits and will post them later this week.

The event kicked off with the opening of the exhibition hall. No exhibition hall I’ve walked exudes more passion and unbridled joy than the one at FFL. Later that night, the tweeters were outside in full force lighting up the internet en masse. Among them were Scott Johnson,Kerri Sparling, George Simmons,Lee Ann Thill, Scott Strangeand the folks from Diabetes Advocates,which actually includes me.

The next morning I was on the roster early to talk about the mindsets we hold living with diabetes – coping and flourishing – and how to move more in the direction of flourishing. At the end of my workshop I met a new attendee, I want to say Becca, but forgive me if I got her name wrong. What I do remember is she’s one of the many dogs being trained to detect high and low blood sugars, how incredible!

Joe was utterly surprised on banquet night by a celebration in his honor – he reached 50 years living with diabetes this year. And as he said so touchingly in my “Flourishing” workshop, he was somehow holding onto the idea that at 50 years it would all be over, and was sorely disappointed to realize it wasn’t. When I heard him say this I thought, yes, I can well imagine feeling the same 11 years from now.

Crystal Bowersox got the house rocking on the last evening playing guitar and singing on stage. Her introduction by DRI VP and dLife’s “Diabetes Dad” Tom Karlya, was not to be missed. Her music is rich and soulful and she was facile interacting with the kids all gathered at her feet. At 26 years old, she was a perfect young mascot for them.

The conference closed with an inspiring speech by Jay Hewitt, type 1 Ironman Traithlon athlete. I will take away three things he said that resonate with me: “Turn the bad thing that happened to you (diabetes) into the best thing that’s happened to you. Each day work toward your personal finish line whether anyone’s looking or not, and failure is a part of succeeding. Don’t let it stop you.” While I think you’d have to be crazy to swim 2.4 miles in the ocean, bike 112 miles and then run 26 miles, (an Ironman triathlon) it’s all the more unbelievable that Jay does it again and again with type 1 diabetes.

The best way to share the event is in pictures of course, so here are a few of the hundred my oh-so-proud husband took.

Here is also a salute to the roster of sponsors, and all who come every year, presenters and attendees, to learn, hug, laugh and draw strength and inspiration for the days in-between July’s annual FFL conference.

Thank you Jeff and Laura. Thanks also to Roche for sponsoring my presentation, “P is for Perfection and Knowing It’s Not The Goal.”