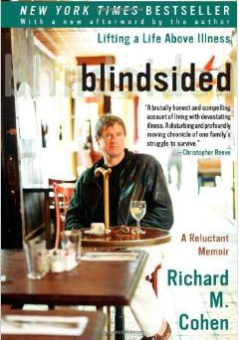 Have you read Blindsided by Richard Cohen? I’ve mentioned it before, and you really should. Already suffering with MS for 20+ years, Cohen got cancer, twice. Thus the title. There’s a presumption, I think most of us make, that if we already have something, like diabetes, that’s it, we’ve got “ours” and so cancer, parkinsons, MS, MD, Alzheimer’s should pass us over. But, life being life, by now we’ve learned there’s no such thing as fair, (although it seems I  have to be constantly reminded) and we are as vulnerable to getting anything as the next guy.

Lately I feel like Mr. Cohen, blindsided. Not by anything major like cancer, but by lots of little ailments. Last year I had an ankle incident and had my foot in a boot cast for three months. It came out of nowhere. I stepped out of my friend’s car after a nice day in Connecticut visiting my parents and walking down the street I felt my ankle go out from under me. Bam, I spent the next three months in a cast.

A week ago, my wrist started hurting. Of course I ignored it the first few days, then when it didn’t subside I went to the doctor to hear a diagnosis of tendonitis. Why? Probably overuse at the computer. Ah, modern day ails.

So now I’m in a wrist brace debating whether to go to the hand surgeon I got a referral for. And, I’m in intermittent pain, waiting to see if it subsides. My increasing hearing loss seems makes me nod my head even though I may not have heard you and my tinnitus, that began a few years ago, I wouldn’t wish on my worst enemy, not that I have any, of course.

These aren’t big things, really, but in a life already defined by taking 3-6 shots a day, pricking my fingers 4-7 times a day, calculating everything I eat, eating when I don’t want to because I’m low, adhering to  a rigorous walking regimen, having several mild to energy-robbing lows each month, don’t I have enough to contend with? Didn’t someone write this down in the big Book of Life?