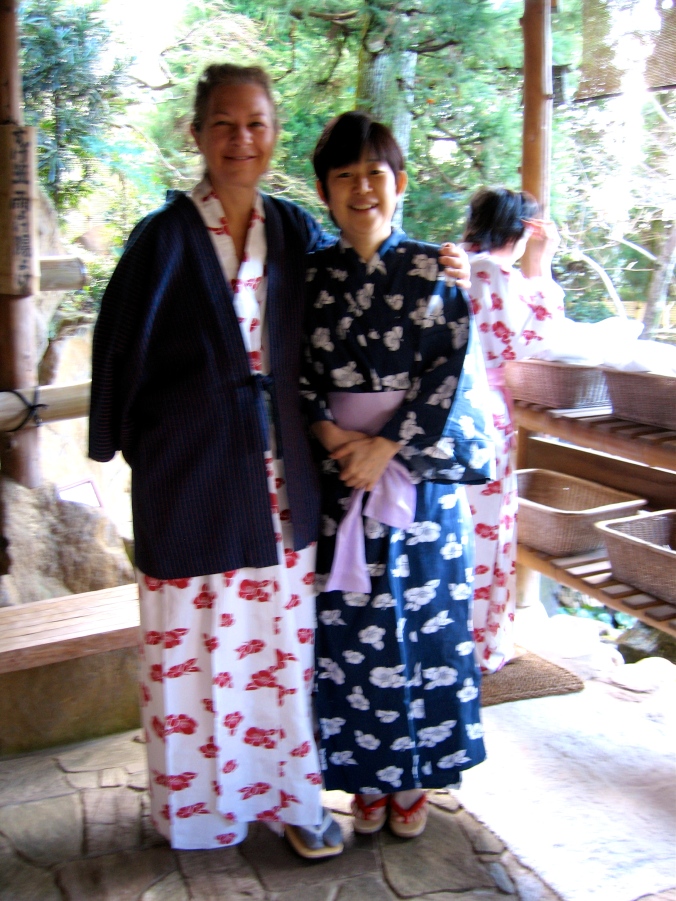 It’s a slow re-entry here in San Francisco from Tokyo before heading home to New York. I would have liked to add a post while in Tokyo, but I was just too busy. Having lived in Tokyo for six years, from 1986-1992 and worked for Dentsu at the time, then the world’s largest advertising agency by billings, I was just having too good a time visiting friends and soaking up every lovely and kooky thing about Japan.

Part of that soak included an overnight stay at an onsen (hot springs) in the countryside in a traditional Japanese inn with hot, relaxing baths both inside and under the stars. The kooky part included warm-seat high-tech-toilets in every major department store and restaurant with so many buttons for cleaning and air drying one’s self that I feared pressing any one of them– and often had to search voraciously just for the flush button.

Suffice to say my answer to Asia in general is: “Drink wine,” it will help lower your blood sugar after all the noodles and rice have raised it. And, as therapists advise, use your numbers as information, not an excuse to beat yourself up. My blood sugars throughout this trip have been far less “in the zone” than usual because my eating has veered from my routine low-carb diet and my exercise has been erratic. I tried for the most part to accept that and to see anew how different foods affect my blood sugar. Luckily, most of the time, I was successful in this attempt.

I did learn while in Japan that the rising epidemic of diabetes has not left them untouched, and why should it when McDonalds and Kentucky Fried Chicken are now staples. Also, one doesn’t speak of diabetes very openly. There are no TV commercials selling meters and strips and if you’re standing in the bookstore in the toonyobyo (diabetes) section you keep your voice down, because to have diabetes is seen as very unfortunate. The Japanese will admit to having “metabolic syndrome” much more easily than diabetes, for that is only a syndrome, while diabetes is an illness. And with many things Japanese, presentation is very important.

Yet, you can see my friends didn’t mind that I have diabetes, and in fact they used it as a great learning opportunity. They got to see up close what it really means to have and live with diabetes and how to take care of it. The constant shots and blood sugar testing were eye-opening, and of course gained much sympathy. And, my friends also went out of their way to provide the unofficial Japan launch of my book, The ABCs Of Loving Yourself With Diabetesat a Chinese restaurant. To my great surprise the book is posted on Amazon in Japan, as well as the U.S., as is also my new book arriving in book stores in July: The 50 Diabetes Myths That Can Ruin Your Life: And the 50 Diabetes Truths That Can Save It.

In all, it’s been quite a ride. Home Saturday to nurse my coming depression ;(