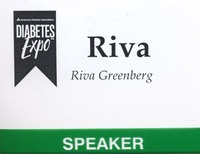 I spoke in front of 60 people twice in the last two weeks at the American Diabetes Association Health Expos — first at the Jacob Javitz Convention Center in New York City, and yesterday at the Convention Center in Tampa. I was a key-note speaker on the Main Stage of the Exhibition Halls sharing healthy tips and my personal tricks managing diabetes. It’s enormously rewarding for me to give these presentations: I love to help, to share my experience and, I guess, be on stage. What few people know, although at times I bring it into my talk about controlling blood sugar, is that my blood sugar often spikes just before I start from pre-stage jitters. Ah, the price of fame.

But that is not the nut of this story. Rather, yesterday at the Tampa Expo after my presentation, I sat in on a CDE’s workshop about ‘Everyday Dealings with Diabetes.’ During the break, I talked with another participant about “burn out.” She is a teacher whose days are so fragmented that she can’t seem to eat and do her exercise as well as she’d like. She also recently had gastric bypass surgery and lost a huge amount of weight. While she generally eats much healthier than she use to, and her need for medication has disappeared, she still has to carefully watch her weight, her diet and her activity, or the benefits could all go away, and her diabetes will return. “I’m constantly “fighting” my diabetes,” she said, exasperated.

My antennae went up immediately. If she’s “fighting” her diabetes, if that’s her attitude, focus and feeling, then she’s going to experience burn-out on a fairly regular basis. Doing battle is exhausting. Further, we typically see a fight as having a winner and a loser. From all she said, I imagined she casts herself as the loser. More tiring still.

“Can you change your attitude?” I asked. “Don’t think of fighting your diabetes. Think, instead of what diabetes has given you. It’s caused you to lose a lot of weight, eat better, start walking and now you have this trim, energetic body. You may not do your best all the time, but you’re doing much better than you ever did before.”

Her blue eyes flashed with surprise and understanding as she got it. She said, “Wow, you’re absolutely right! I’m so glad you said this. Thank you.”

A few hours later while going through security at Tampa airport, I was still wearing my speaker’s badge from the Expo. If I’m honest, it was intentional: I was curious to see if anyone would approach me and start talking about diabetes. I thought maybe I could help someone, even outside the Exhibition Hall.

Well, who noticed my badge but the TSA security officer! As my suitcase made its way through the screening machine, the operator noticed something suspicious. So Bob, according to his name plate, politely asked if he could open my bag. As he did so he noticed my badge. Now, I thought, I’m dog meat! He’ll look for my syringes and this will start a whole episode. Bob said, “So, you were a speaker at the ADA Health Expo?” “Yes,” I said, not wanting to engage. “Hmm… “ he said, “Interesting.” “Why?” I queried, forgetting my disengagement strategy. “Well,” said Bob smiling, I have diabetes.” And so it began. As his white-gloved hand found the menacing granola bar in my case, Bob told me about his A1c, his diet, and how he’s still gotta lose a few pounds but he’s working on it.

We chatted for a good five minutes off the line, and I was smiling all the while thinking here I was helping the TSA security officer! Who woulda thought? I also realized, as I walked to my gate, with Bob wishing me a safe flight, that when you stay alert and open and in a space of gratitude, you can help anyone, anytime, anywhere — particularly if you wear a sign saying, ‘Diabetes Speaker!’