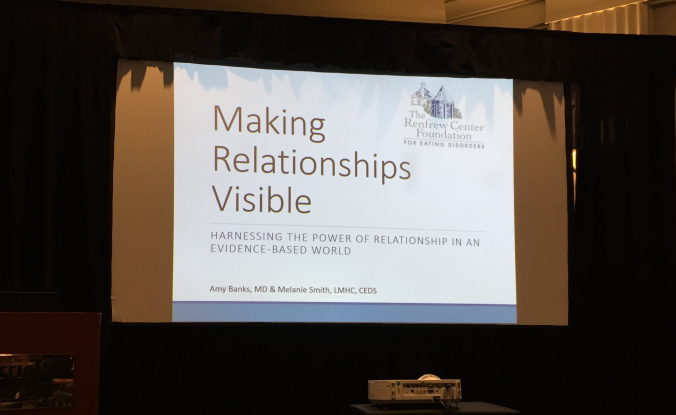 I attended The Renfrew Center’s 29th annual conference last weekend in Philadelphia that brings together expert speakers in the care and treatment of, and research regarding, people who have eating disorders.

I was not a speaker, just one of the few hundred participants who gathered to learn and expand my understanding and knowledge. I always think it’s good to expose yourself to things outside your own field, they generally lead to new insights in your own work.

Most attendees were therapists and dietitians, many of whom specialize in working with people who have an eating disorder. From observation the group was 98.5 percent female. At one point I thought, so this is what the world would look and feel like if only women existed. It wasn’t bad 😉

I attended two lectures on relational therapy, a personal interest as the Flourishing Approach I share with health professionals is grounded in relationship centered care. The sessions confirmed my views: that a major source of suffering is isolation, a major source of well being is connection, that in healthcare we apply vague principles based on averages gathered in highly structured trials to complex individuals living in the real world.

The speakers were top notch. The relational sessions I attended were led by Amy Banks, MD and psychologists Judith Brisman and Judith Ruskay Rabinor. Also fascinating was learning more about the bias of scientific research, what gets published and what doesn’t. PhD Laura Hill mesmerized us regards how brain chemistry and neuronal wiring is a key component influencing our eating behaviors. It is not just emotional.  Further, for someone with a disordered brain, thoughts and feelings around changing how they eat is uncomfortable, frustrating, frightening and herculean beyond our imagination. Truly, we can’t imagine.

Journalist Laura Ling was the first day’s keynote speaker. Compassionate and passionate,  she shared her harrowing 140 days of being held hostage as a prisoner in North Korea. And since the conference theme was “Discerning Truth,” the next day’s keynote was delivered by William Doherty, Professor and therapist, who kept us laughing through his dissection of our divisive political environment.

Of course food and diabetes go hand in hand, so I was also interested why it’s so hard for people with diabetes, largely type 2, to change their eating habits when their health depends on it, and curious if diabulemia is seen as any different than other eating disorders. To be honest, there wasn’t much to be had regards diabetes, but I have gotten completely sucked down the “rabbit hole” on disordered eating. I am eager to understand  for those who live with anorexia, bulimia and/or binge eating, what psychological and biological issues are prompting the starving, purging and stuffing?

Next year’s conference will be in November in Philadelphia. In addition to out patient services around the country, Renfrew may be the only eating disorder center that has a residential facility in Philadelphia for those who need a more comprehensive, structured and intensive level of care. The Renfrew Center has been on the leading edge of this work since its establishment in 1985. I was happy to widen my lens.